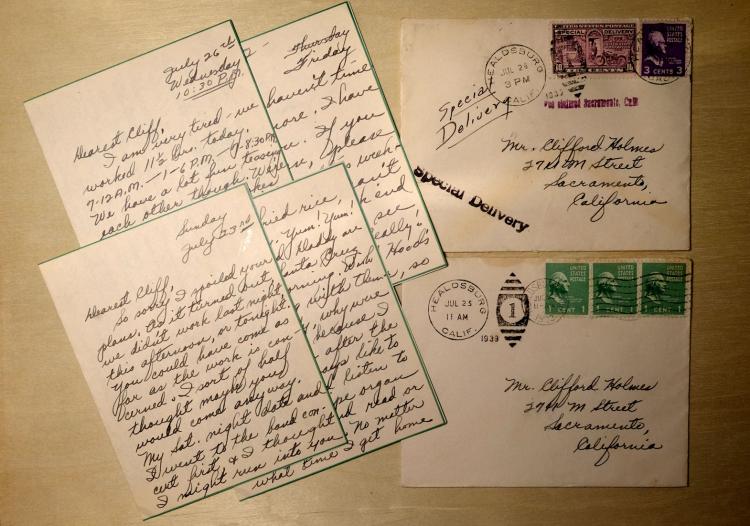 One lazy Sunday, I went for a walk and wandered into locally-legendary Pauline's Antiques. Overflowing with seemingly millions of very vintage to kinda old things and really cool to what-even-is-this stuff, it was a legit time capsule in a 7,000 sq. ft. retail space, including a truly sketchy basement. 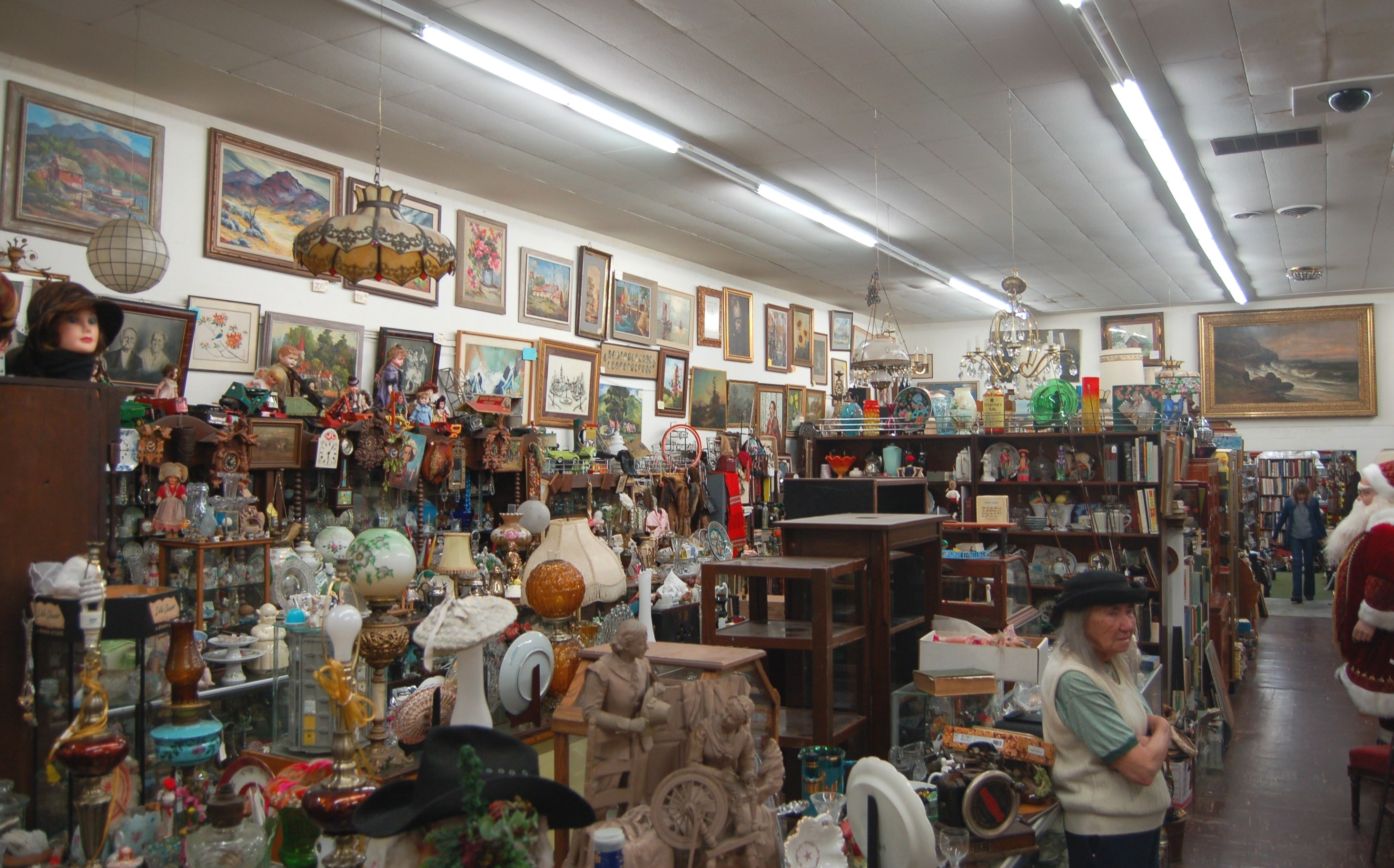 While pawing through piles of ancient stationery - both used and, well, not new but unused, I came upon two small letters from a woman named Mary E. Stubbs, in Healdsburg, California, to a man named Clifford Holmes, in Sacramento. The letters were sent in the summer of 1939. Each envelope has two pieces of small stationery. She wrote both missives in two parts, each over a period of 2-3 days. The second letter went out just three days after the first and was sent "Special Delivery," which cost as four times as much. Impressively, it was picked up at 3PM in Healdsburg and received at the post office in Sacramento by 11PM that night. 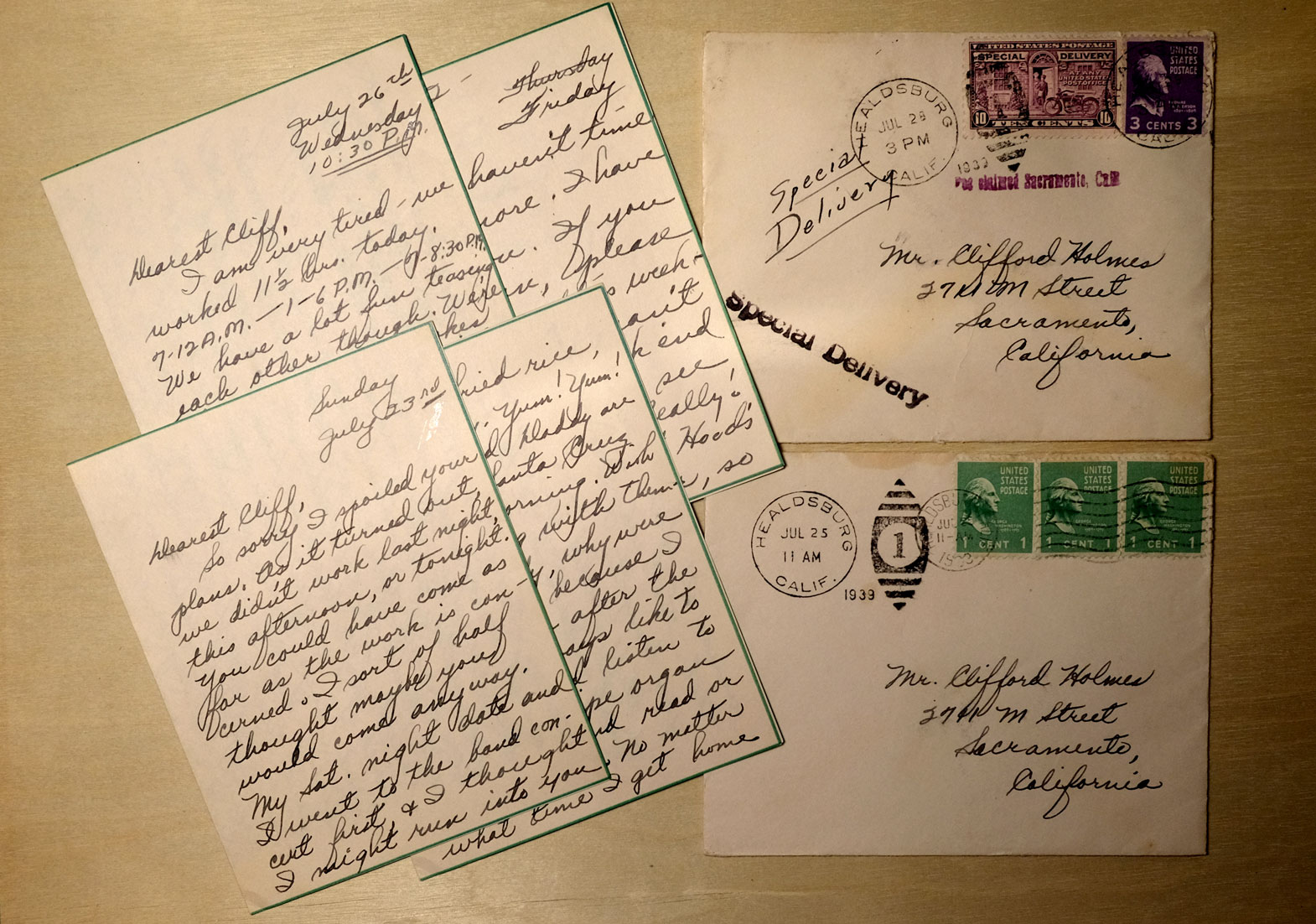 She writes about going to work, spending time with friends, feeling blue, the colored photos her friends brought back from Europe and how she intends to go there one day, "Just see if I don't!" she exclaims. Pointing out that she always tells him what she does with her evenings and he never tells her, she asks Clifford what special things he does with his time. She asks him for a picture of himself, and another poem (apparently he'd been published.) The first three parts are casual, a little flirty and convey a lot of non-urgent information, but the fourth piece is simply:

"Cliff, I haven't time to write more. I have to see you. If you possibly can, please come over this weekend. If you can't come this weekend, I may never see you again. Really! I'm staying at Hood's at 507 Tucker, so come there. Please come it's so urgent! Loads of love, Mary." 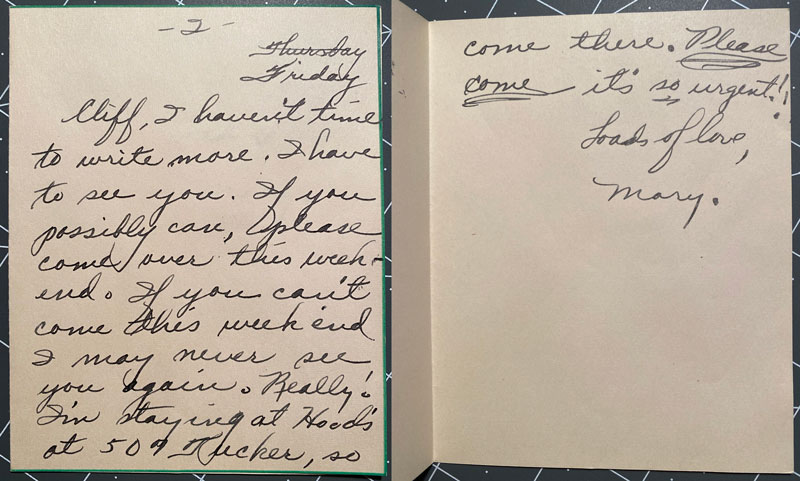 I became fascinated and started doing research. I found a picture of her through the Healdsburg Museum. There's a photo of the Healdsburg High School class of '36, which includes one Mary E. Stubbs. I think she looks anxious and susceptible to theatrics. 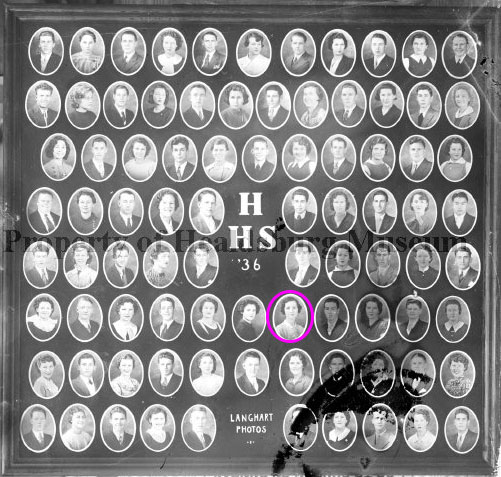 I wonder, did Clifford come over? Did she ever go to Europe like she insisted she would? Another intrigue is that she describes a date she went on and how she thought she might run into him, Clifford, at the show but was disappointed that she did not. It truly sounds like Healdsburg was thee place to be in the 30s. She says she went on a group date with other couples, but clearly she has an intense interest in Clifford. Were they clandestine? Were they in cahoots? Was she a very avant garde and free woman? What happened?!

Healdsburg and Sacramento aren't that close together. Google Maps says it's a two-hour drive even today. Especially in the late 30s, there weren't nearly as many cars nor highways, so I wonder how these two met, what their relationship was and what became of it.

A couple of weeks later I discovered that, after 60 years, Pauline's Antiques was closing. It occurred to me that I had precious little time left to see if there were any other effects of Mary Ellen's or Clifford's. I spent a few days and many dusty hours looking through thousands of random items, which were kind of organized but not really, as they were just trying to clear out the space.

It's hard to adequately convey how ecstatic I was when I found one more thing, this card (front & back). I couldn't have been more excited if I'd found the jewel of the Nile.

I drove to Healdsburg and went to where "Hood's" used to be. It's a parking lot now. I also went to the library there and met the fine people who spend their time cataloguing the history of area residents long past. They pointed me to a great resource, the California Digital Newspaper Collection from the Center for Bibliographical Studies.

Through this incredible resource, I learned a lot about Mary Ellen, her family, and her many friends.

From the Healdsburg Tribune, Enterprise and Scimitar, 24 June 1940.

Reverend and Mrs. John Stubbs and their daughters, Mary Ellen and Marjorie, expect to leave Wed for Eureka, where they will make their future home, Rev. Stubbs having accepted the pastorate of the Christian Church there. He has been filling the pulpit of the local Christian Church there. Rev. Stubbs will drive to San Francisco Tuesday to get Marjorie, who has been at the Children's Hospital while having a new brace fitted. Previous to the departure of the Stubbs family, Healdsburg friends have been entertaining them at dinner.

There were several articles about the activities of the Stubbs family. The biggest news, though, concerned Mary Ellen's sister Marjorie:

It’s not everyone that can show a personal birthday letter from President Roosevelt. How could you blame Majorie Ann Stubbs for being jubilant Monday when she received in the mail this message. The president had evidently read of Marjorie’s plight in the Healdsburg Tribune, for she had just come home from the Children’s hospital in San Francisco where she had been confined for over two years with infantile paralysis (ed. polio). She arrived in time to celebrate her sixteenth birthday, December 26. Stricken by the dreaded disease Sept. 30, 1935, Marjorie Ann has nevertheless continued her high school studies while in the hospital, and has made rapid progress in them as well as her recovery of health. Just before Christmas she came to Healdsburg to stay with her parents, Rev. and Mrs. John F. Stubbs, several months. While she has been here, Marjorie Ann has attended every service of the Christian church of which her father is pastor, in her wheel chair. She has also been guest of honor of several parties given by the young people of the church. A copy of the letter just received follows; THE WHITE HOUSE WASHINGTON, D. C. December 27 (Private) My Dear Miss Stubbs: I have just read a newspaper article about you which has come to my attention. I am sorry to learn of your illness but am glad that you are getting along so well. I hope you will let nothing discourage you in your efforts for continued improvement. This little note gives me an opportunity also to extend my heartiest congratulations and best wishes for your birthday which you celebrated on December twentysixth. Very sincerely yours, Franklin D. Roosevelt (Signed) Miss Marjorie Ann Stubbs, John Stubbs, Pastor; First Christian Church Healdsburg, California.

The relentless local newspaper coverage of the Stubbs family tapered off over the years. Pastor Stubbs died in 1967. Mary Ellen went to college in Fresno. What I learned, mainly, is that it's not a new thing to report to the whole world what you had for dinner, what concert you went to, who came to visit. It's just that now we report on our own lives in this way rather than the local news picking up on our church socials and hospital stays. People are so weird.

Thirty-five members of the Christian Endeavor society of the Healdsburg Christian church were present to enjoy the annual banquet of the organization which was held in the church annex on Friday evening. New members of the society were initiated at an impressive candle light ceremony; and the officers who were elected recently, including Miss Marion Prest, president; Leonard Green (this is the Leonard referenced in the note on Mary's name card whom she doesn't want Clifford to show her poetry to, "You can understand why"), vice president; and Miss Hazel Hood, secretary-treasurer (This is whom "Hood's" refers to when Mary Ellen says she's "staying at Hood's" in her desperate letter to Clifford), were installed by Rev. John F. Stubbs (Mary's father). Brahams’ waltz in A Flat was played as a piano solo by Miss Genevieve Robinson, following which the principal feature of the evening’s program, consisting of three reels of motion pictures, was presented by Dr. and Mrs. F. E. Sohler, the scenes having been filmed by them during their travels in Africa. A color scheme of yellow and orange was carried out in the decorations and table appointments for the affair; and the dinner was prepared and served by Mrs. John F. Stubbs (Mary's mother), assisted by the Misses Mary Louise and Martha Roux and Opal White. Arthur Pope and Robert Wallace, having enjoyed a fine visit in Healdsburg, departed Monday for a short stay in San Francisco and later on expected to go to Santa Barbara, the home of Pope.

I also was reminded that women used to lose their personal identity and become a subsidiary of their husbands when they got married. This was the entirety of a brief piece in the society column about two women and their activities, yet both mother and daughter are only referred to by their association to their husbands, and the daughter is mentioned after the son-in-law in both instances. I never found Mary's mother's first name.

Mrs. L.M. McClary of Des Moines, IA enjoyed a visit with the home of her son-in-law and daughter, Reverend and Mrs. John F. Stubbs.

Eventually, I became kind of bored with the investigation. I couldn't keep the stories straight, and I wasn't really sure what I was even looking for.

Just before she cleared out the last of her vast stores of antiquities and assorted junk, I asked Pauline if she recognized the names. She didn't know Mary Ellen, but she did know Clifford. He was a friend of her brother's. Although I found no evidence that they ended up together, the two letters must have had some value to Clifford since he kept both of them among his personal effects for nearly eight decades. In addition to being a poet and a musician, he became a prolific and recognized painter. Pauline had a LOT of his paintings and I almost bought one but... well, I didn't like them that much. 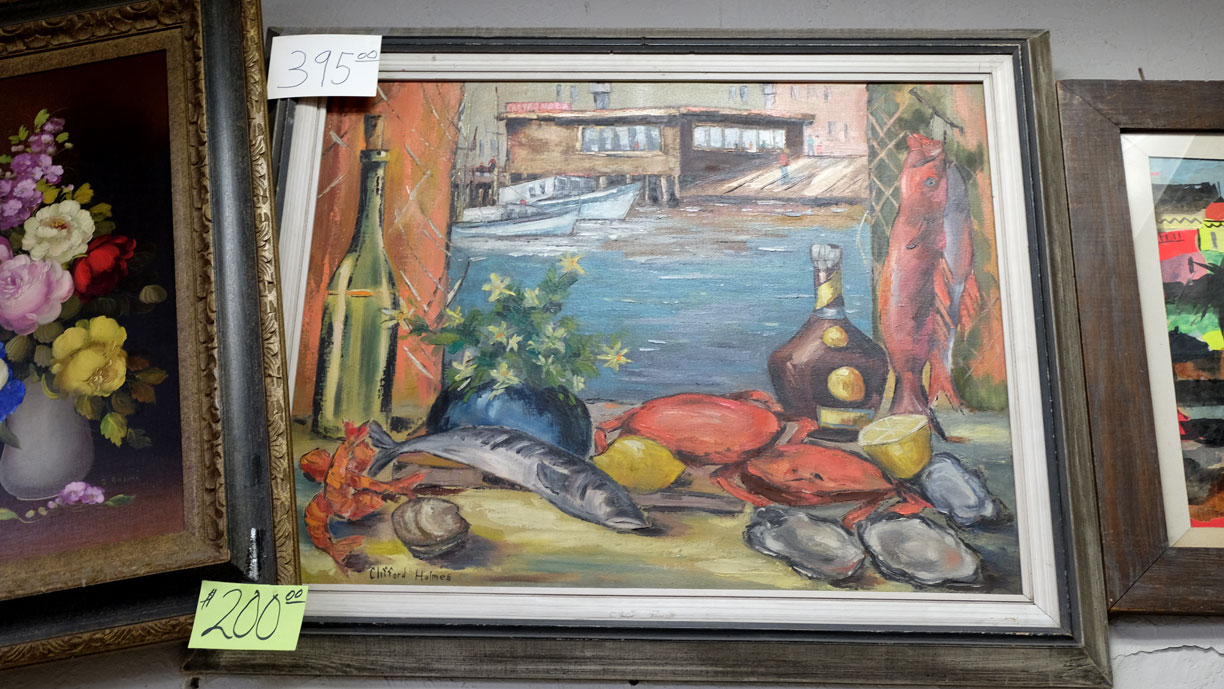 There is no big reveal, no denouement, but it was fun and surprising to discover how much of the lives of complete strangers I was able to piece together.