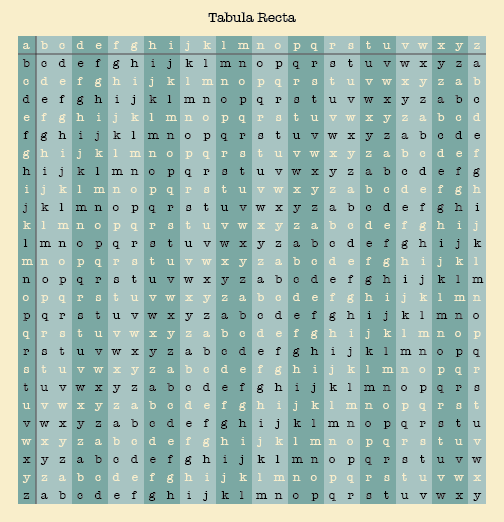 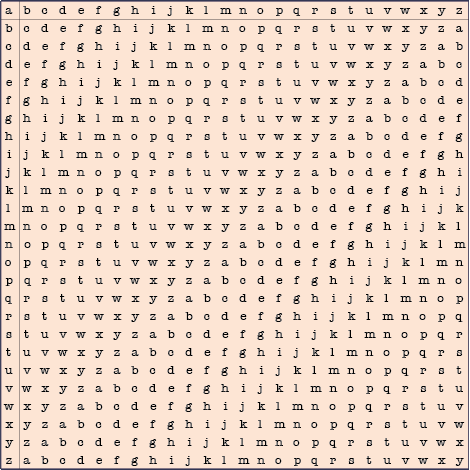 This is a tabula recta. It's a table of the alphabet with each subsequent row shifted one to the left. The letter that is bumped off is added onto the end of the row. It's for cryptography, specifically, the polyalphabetic Vigenère cipher, aka le chiffre indéchiffrable (French for 'the indecipherable cipher'), wherein plaintext is encoded via a repeated keyword and the following table. There is a another method, called the Variant Beaufort, which is a reciprocal cipher, meaning the plaintext is encrypted via the decryption method, and vice versa... but that is merely one step beyond and easily checked for as well.

Pretty sure that nobody except cryptography nerds uses a tabula recta anymore. There are sites and scripts online to decrypt ciphertext with known keywords/phrases. However, it was generally invincible for about 300 years until Charles Babbage, and later, more usefully, Friedrich Kasiski, discovered that it was susceptible to frequency analysis just like any monoalphabetic ciphertext would be, if only extrapolated to guess and check for key length.

Say I want to encode, "my spoon is too big." with the keyword, "pickle". For the letter, "m", I would look at the tabula recta and find, "m", then look right, to the letter, "p", then up to the top and use that letter, "d", in the ciphertext. You can extrapolate the rest from that simple method. Repeat the keyword as needed:

The typical tabula recta is rather indistinct, visually, so I took a few tries at making it easier to use. With subtle delineation, the eye can more confidently, and quickly, trace from the plaintext letter, across or down to the key letter, and up or back to the cipher letter.