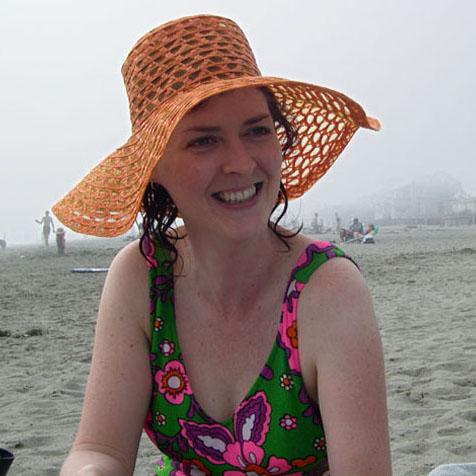 My friend Shannon and her husband Bill were planning a week-long trip out of town. They lived in a nice, spacious house in the Bernal Heights neighborhood of San Francisco with a big, beautiful dog and two cats. Shannon asked me if I wanted to stay at their place and pet sit while they were away. Yes! I was so excited to have a whole home to myself and take a break from living with a roommate in the perpetually fogged-in Inner Sunset district. Pretty sure my roommate was just as excited.

The day before the house-sittees were to return, my friend Swinney and I resolved to drive to Santa Cruz and have lunch at Saturn Cafe, famous for its extensive vegan menu and groovy decor.

We drove down Highway 1 along the California coastline. About halfway there, we stopped at one of the many public beaches on the road side and walked around inspecting the nature of things. We examined broken sea shell bits, slimy kelp, smooth stones, and worn driftwood. It was spring and just the right time of year for a good amount of rain run-off from the nearby mountains. A swiftly flowing yet shallow stream was making its way across the beach back to the mother ocean.

One side of the riverlet had carved away at a fairly mountainous sand dune thus creating a cliff about 8, maybe 10, feet high. Peering over the edge, we were saddened and grossed out to see the bloated remains of a sea lion that had beached itself up the waterway right below where we were standing. Swinney stepped back, but I thought it would be funny to make a tiny avalanche.

I stomped at the edge, "Hey, look at me! I'm making a tiny avalanche! Haha!" It was hilarious.

Swinney, "Ert, you better get away from there..."

Me, jumping up and down, "No way! I can do it! Look I'm a giant! I'm making a tiny avala...aaaaaaaaaggghhh!"

The semi-solid sand gave way beneath me. It's a curious sensation to feel earth collapse under your feet. It was slow, not a great fright but disorienting. I tumbled down the incline, landing comically and perilously close to the dead sea lion. I couldn't get back up without climbing and piling sand and getting a hand from Swinney. He shook his head, telling me he'd told me so and took photos of me stranded down there before helping me up. I wasn't hurt, just dirty and embarrassed. I did my best to de-sand myself, but as we all know, sand gets everywhere.

We eventually got our lunch and had a peaceful drive back to SF in the late afternoon sun. The rest of our trip was uneventful, though I smelled pretty bad.

The next morning, before Shannon and Bill's return, I thought it best to take advantage of being in a house with a washer and dryer and wash all my clothes, including the ones from my day at the beach. Naked to the world, I brought the first finished load upstairs from the dryer and plopped it on the couch. From this heap, I put on a bra and underwear then stepped into the black cotton Dickies I'd worn the day before. They were my favorite pants at the time, form-fitting and flattering. After buttoning and zipping, I put my hands in the pockets to push the fabric down and flatten them out. I was annoyed to discover that, despite going through a machine wash and tumble dry, there was still a significant amount of sand in my pockets.

I got an idea. I'd step out onto the back porch, pull my pockets inside out, and flick them about to be rid of it.

As I was standing on the small wooden platform just outside the back door, I noticed one of the cats in the hallway getting an idea of its own about stepping outside. Clearly making its way toward me in an effort to escape, which I'd been warned I needed to guard against, I thought fast and pulled the door closed to keep the kitty from getting out. It was a close call.

That's when I discovered that the door was locked. And there I was, wearing only a bra and pants. No shoes, no socks, no shirt, no service. No phone, no keys, no wallet, no nothing.

Shannon and Bill's backyard was a smallish space with high fences and no normal outlet except for the route I'd just eliminated for myself. The perimeter was lined with various trees, shrubs and grasses. It didn't look like a good idea to get into any of that with so much of my fleshy real estate exposed. Anyway, behind the flora were walls so tall and featureless that I could not climb over them if I tried, and even if I did, I would just end up in someone else's back yard. I couldn't reach any windows facing the backyard as the steps from the small porch went down a couple feet, putting them all out of reach and there was nothing to stand on. Even if I could get to them, the windows were surely locked. The only means of escape was to inch sideways along a dark, damp, muddy, narrow space between their house and the neighbor's, then climb up and over a six-foot-plus, splintery wood plank fence with tops shaped like spears. It looked like the teeth of a hand saw. I was grateful for the good fortune to be wearing anything at all as I inexpertly leveraged my back against the house while pushing and pulling myself up. I scaled the fence and dropped down on the other side, in front of the house and free.

My car was parked across the street, and I had a spare key in a little magnetic box hidden under the bumper. Hoping I was invisible, as I scanned the neighborhood and saw no one, I decided to make a run for it. Unfortunately, I had not hidden any spare clothes in my car, so my next big idea was to go to a friend's house and borrow something to hide my shame. I drove across town, maybe 3-4 miles, from Bernal Heights to my friend Colby's flat in Hayes Valley.

San Francisco is notoriously lousy for parking, and I ended up in a spot a few blocks away. Though both homes were in what locals consider residential areas, there was much more traffic and many more people around Hayes Street. Whereas I saw not one person during my escape from the backyard in Bernal, I was openly gawked at and catcalled as I walked barefoot and shirtless to Colby's place.

At his front door, mortified, I knocked loudly and insistently until he opened up. What a sight I must have been. He didn't seem even a little bit surprised as he laughed out loud and let me in. Colby is about 6'4" and could only offer voluminous shirts and huge man shoes, but I was grateful nonetheless.

Luckily, I didn't have to wait too long before Shannon and Bill returned home. I was able to go back, retrieve my own, normal-sized clothes and relate the whole humiliating misadventure. It was all very entertaining and became a funny news item in our social circle for little while.

About a year later, Shannon and Bill made plans to move to Amsterdam. They were selling the house and leaving many of their possessions behind. Various household items were donated to lucky me, so I helped them pack. I got a queen-size bed and a bunch of nice kitchen stuff, also a lamp, a desk... loads of things. We worked all day packing and stacking boxes into the moving truck. Afterward, we had snacks and drinks and lounged out front in the late daylight.

A man from next door came outside and chatted with us in that neighborly way that people do. He was curious about their exodus, and I was curious about him, all hunky and charming. Shannon and Bill invited him to join us, and I attempted to enchant him with my winning ways. After a while, he looked at me very intently, studying my face with a bemused grin and said, "You look so familiar to me." I smiled, blushed and carried on with my campaign.

Later in the conversation, the tale of my "adventure" came up. As Shannon, Bill and I reminisced about my wacky hijinx, the neighbor's face lit up, "I knew it! I knew I recognized you! You're the nearly naked girl I saw climbing over the fence!"