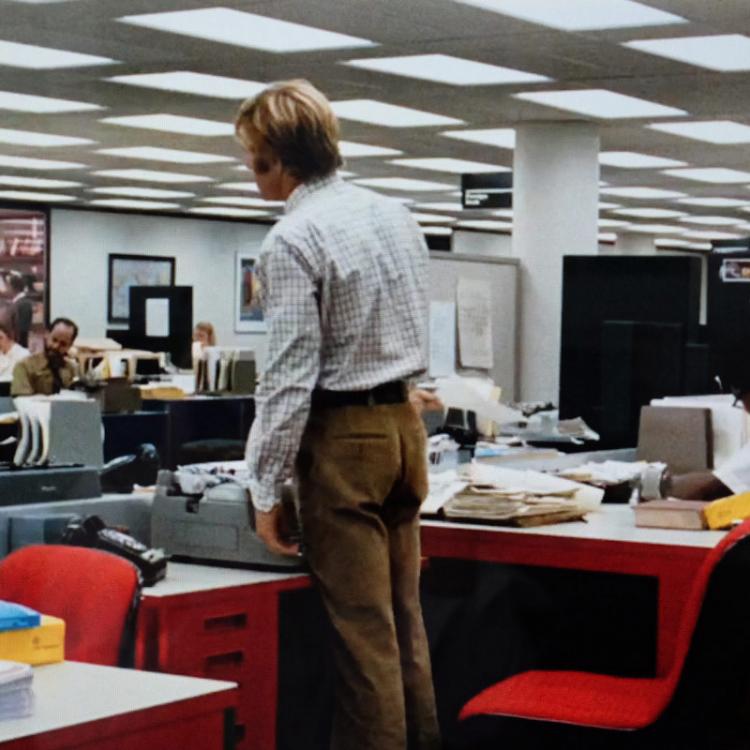 I recently watched Steven Spielberg's The Post (2017) after which I felt compelled to watch All the President's Men (1976), because I had never seen it. Heard about it my entire life, never saw it. But, I am actually glad to have watched it after The Post, because I was able to learn about the Washington Post's role in the Pentagon Papers and Watergate on a linear timeline. The Post ends exactly where All the President's Men begins.

It is super weird to watch a recent film (The Post) about events that happened 40+ years ago and subsequently watch a film (All the President's Men) about events that immediately followed those in the first film, but the latter was made immediately after the actual events. That is a weird experience, just, temporally, if nothing else. But, also stylistically!

The color-coordinated office furniture in the Washington Post newsroom in All the President's Men... where is it in The Post? Did Spielberg even watch AtPM? You could hardly miss the color-blocking desks, chairs and file cabinets in red, green, blue and black. In The Post, all of the desks, chairs and file cabinets are a dark ominous grey. In both, the guest chairs in Ben Bradlee's office are yellow, but in The Post they're Danish midcentury modern, rosewood and leather, but in All the President's Men, they're 60s mod curvilinear plastic and wool. The Post's office furniture is from the late 50s-early 60s. They use neat rows of gunmetal tanker desks with rounded corners and metal chairs, but in All the President's Men, the furniture is late 60s-early 70s modular pieces, all color coordinated, with right angles and formica tops, definitely not aligned in the layout of the room. 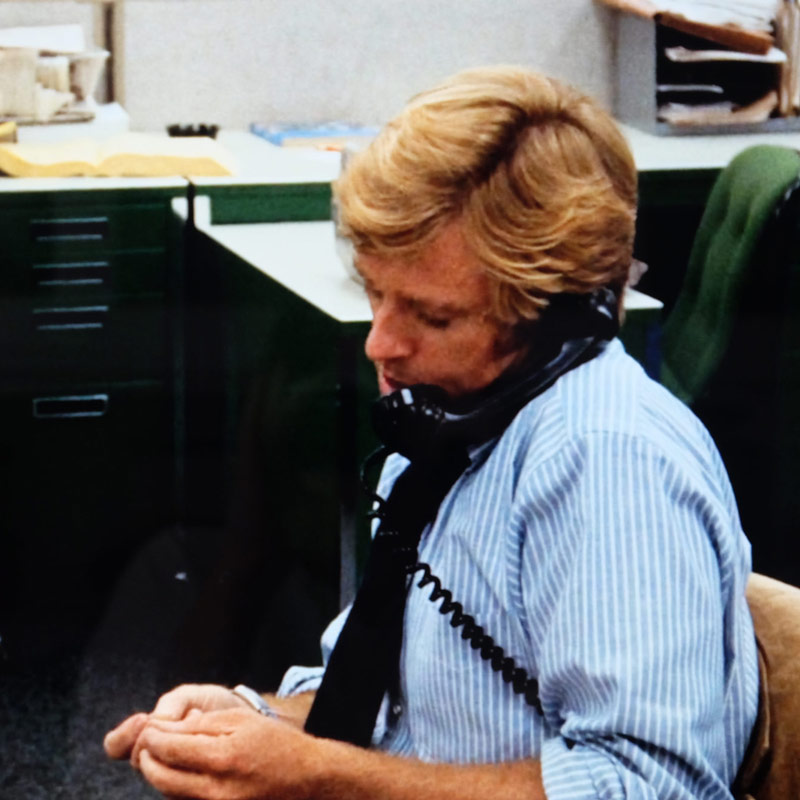 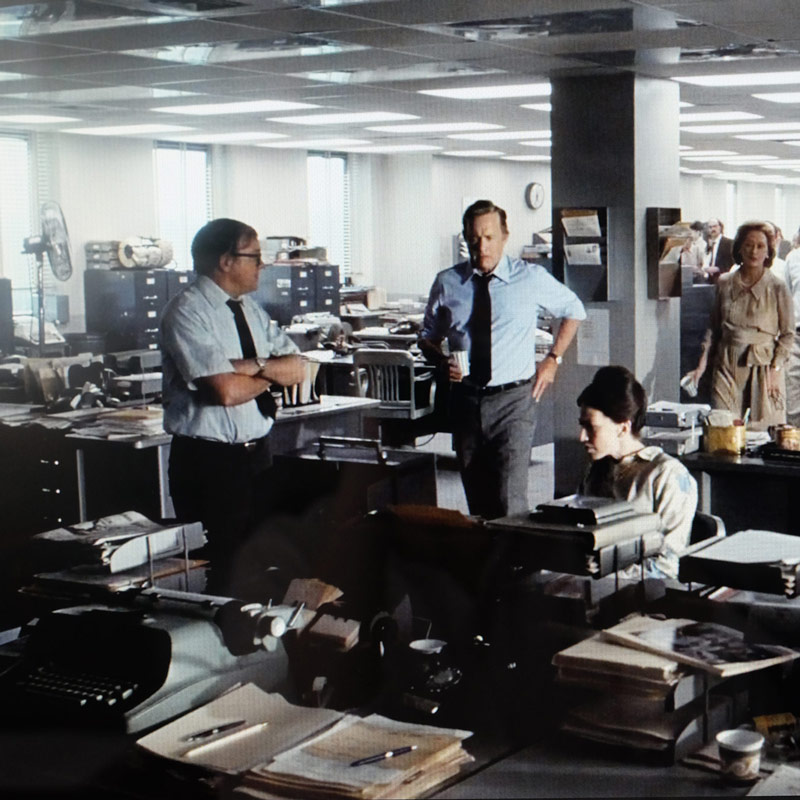 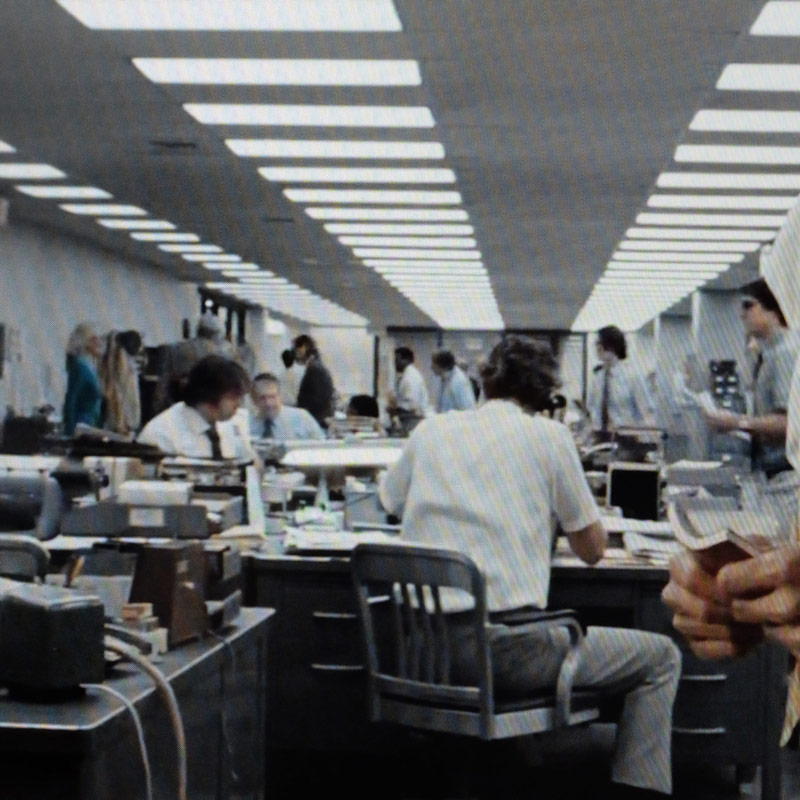 Another thing about watching a film made in the 70s, about events in the 70s, is the abject pain of watching how long it took to do things that we can now do in seconds. Whose decision was it to film and include in the final cut: Robert Redford dialing entire phone numbers on a rotary phone or looking through a massive library of telephone books to find a name, Dustin Hoffman laboriously typing a story with a typewriter on paper, the both of them carrying their finished pieces to other people's desks, and the two of them spending hours upon hours at the Library of Congress scouring checkout records but coming up empty. Perhaps it is key to the story to understand just what a frustrating effort it was to get the most banal information. But, as far as resources go, they also had Mark Felt aka Deep Throat. Of course, Felt was so fascinating he required a film focus of his own.

The screenplay for All the President's Men cuts off at Nixon's re-election. Woodward and Bernstein's book covers the full events, through his resignation. Maybe director Alan Pakula accepted the shortened script because the events were so recent and impactful that he figured the film could sign off with a good old, "And we all know what happened next..." I can't help but wonder if the glacial scenes of tedious office tasks were shortened, would there have been room for more story? Who can say! It is what it is. Who am I to criticize a legendary film? It's fine. It's great, of course. It is a great film. I wish there was more.

Interestingly, security guard Frank Wills, who discovered the break-in (and called the police) at the Democratic National Committee (DNC) headquarters at the Watergate office complex in Washington, D.C. on June 17, 1972, played himself in All the President's Men. His scene was about 11 seconds long, which seems to give short shrift to his role in the events. In The Post, the scene at the Watergate is much more significant. It's a shame he didn't live long enough to see it.

Slate published a terrifically thorough review, "The Post Is a Rousing Call to Resistance That Couldn’t Feel More Timely", by Fred Kaplan.

What is up with that office furniture though?